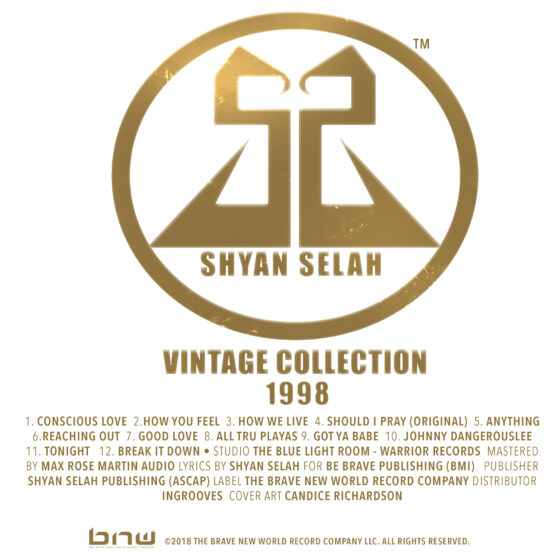 The Vintage Collection by Shyan Selah was originally recorded in 1998 at The Blue Light Room Studios in Des Moines Washington and released under the title “Shyan Selah The Debut Album” on Warrior Records International. The Brave New World Record Company will be re- releasing it via its distribution partner INgrooves as a part of a vintage tribute series featuring some of the lost or never-before-heard or released songs from the catalog and archives of Creative Artist Shyan Selah. All archived catalog releases will be stamped with a “Vintage Collection” insignia and will be released periodically throughout the coming years. As a tribute to the impassioned career of Shyan Selah, these releases will be unveiled with dramatic stories, interviews, artwork, and products that dig deep into the work of one of the world’s most creative under the radar talents. Music from The Vintage Collection 1998 contains the first ever releases from Shyan Selah. The songs were written and recorded by Shyan Selah and the tracks were produced respectively by by DJ Rocdusa (Conscious Love, How you feel, Break It Down) Erik Willis (Good Love, All Tru Playas, Got Ya Babe, Tonight) Carl Savannah (How We Live, Johnny Dangerouslee) and DJ Kaz (Should I Pray, Reaching Out). Featured and Background vocal credit goes to Rafeedah Muhammad on “Should I Pray,” Devon Jackson on “How We Live,” Littel Paul on “Anything,” Phyllis Henry and Jessica Sands on “Reaching Out,” Mike Wilson on “Good Love,” Erik Willis and on “Got Ya Babe,” Mae Aesquivel on “Got Ya Babe,” and “Tonight” and Julia Ryan and Q Dot on “Break it Down.” The album was mixed by Carl Savannah and mastered by Max Rose at Martin Audio.